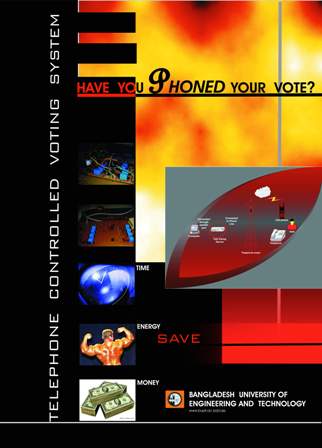 Voting is not just a precious right, it is the first duty of democracy. But during the election many people are negligent about this supreme duty. Many people don't care to vote for the wastage of time in the long queue in front of the voting center. People who are far away form the voting center, face difficulty to find any convenient transportation. Also, in the countries where the political situation is unstable, people are afraid to go to the voting centers. Considering voting as a citizen's national right, the Telephone Controlled Voting System has been designed at the minimum possible cost with the maximum utility. This system supports remote voting from far distances using a phone line only. The televoting device is connected to the phone line and interfaced with PC via parallel port. A voter calls the given phone number and enters his/her voter ID and password via the telephone keypad. After authentication, a list of candidates is read out to the user. User selects the desired choice and inputs the number through telephone digits. Upon user confirmation, the vote is accepted and saved to database.

Developing countries may not have strong internet backbone, but, almost every country has telephone connections in the most rural areas. This system provides support for an easy way of voting maintaining appropriate security. This system can be a perfect replacement of the postal ballot system for the citizens who are abroad. Also, this system facilitates the visually impaired persons to cast their vote without the help of others.

One of the Top Ten Innovative Projects of Bangladesh
Selected for IT Entrepreneurship Development Program
Basis SoftExpo 2004, Dhaka

[Developers are currently Lecturers of Department of CSE, BUET. At the time of development they were students of the same department.]