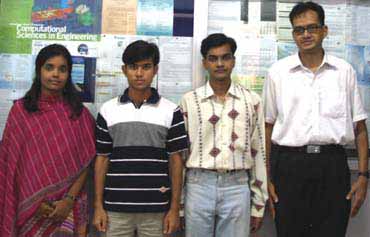 3SM Systems is a group of freelance programmers from Department of CSE, BUET who are the pioneers of Bangla SMS in Bangladesh. They have developed two different Bangla SMS solutions so far. The picture based solution has been launched by pioneering mobile operator Pacific Bangladesh Telecom Limited (Citycell) as their value added service on May 13, 2005. This was preceded by an agreement signed between 3SM Systems and Citycell on April 26, 2005. 3SM Systems has also released a text based solution free for public download for the Java enabled mobile sets and which is independent of operators.

The members of 3SM Systems are: Hasan Shihab Uddin, Sujoy Kumar Chowdhury, Nahid Mahfuza Alam (Shapla), and Md. Mahbubur Rahman. The name of their group 3SM is formed by taking the initials of their names. They were students of Level 3 Term 2 when they developed their Citycell Product. Their website is http://www.banglasms.com.

In the context of February 2005, text based or Unicode based hardware support was not available in common mobile sets. Moreover, Juktakkhor (Conjunct letters) support is limited in Unicode, if not none. That's why the picture based system was developed first as the appropriate one for Bangla SMS. This is the first time in Bangladesh that Bangla SMS is introduced, which initially seemed to be impossible due to lack of hardware support. In this system, the user first types 'to', then the destination number and then the phonetic representation of the desired Bangla message using English alphabet. The rules that dictate this input method are only three in number and deeply rooted to the basics of Bangla grammar. After composing the message, it is sent to 1412 ( resembling the Bengali New Year it was introduced). For example, to send the first few words of our national anthem to 011345678 number, the user has to type "to 011345678 aamaar sonaar baanglaa". At the short message server, all messages incoming to 1412 are redirected to the ESME (External Short Message Entity) client implemented by 3SM Systems. This client transforms the English message into equivalent Bangla message, transforms it into a generic OTA (Over The Air) picture, adds necessary set-dependent header and returns to the short message server. The server then sends it to the recipient's set. Since it is a picture based system, its length has been limited by the operator for maximum 3 lines of Bengali message at the flat rate of Tk. 2 only. Other mobile operators are yet to offer a static picture downloading service at such low rate, let alone this dynamic Bangla messaging service.

Following the immense response regarding the first Bangla SMS system and with the introduction of GPRS along with more java enabled mobile sets, 3SM Systems released their previously developed first ever text based Bangla SMS software for mobile sets. From August 23, 2005-this software is freely available for download at their website. This software enables a user to input Bangla message at the rate of merely two keystrokes per letter, which is pretty revolutionary in the context of mobile sets. Moreover, this software is equipped with several intuitive visual input methods, complete juktakkhor (conjunct letter) support and full featured Bangla SMS inbox and outbox. This software is very lightweight, can be downloaded via GPRS or data cable or even OTA. The software they developed is a generic MIDP 1.0 application, using only one feature of MIDP 2.0 for auto-invoking. Some very interesting features have been implemented by 3SM Systems which will be available from the next updated versions.