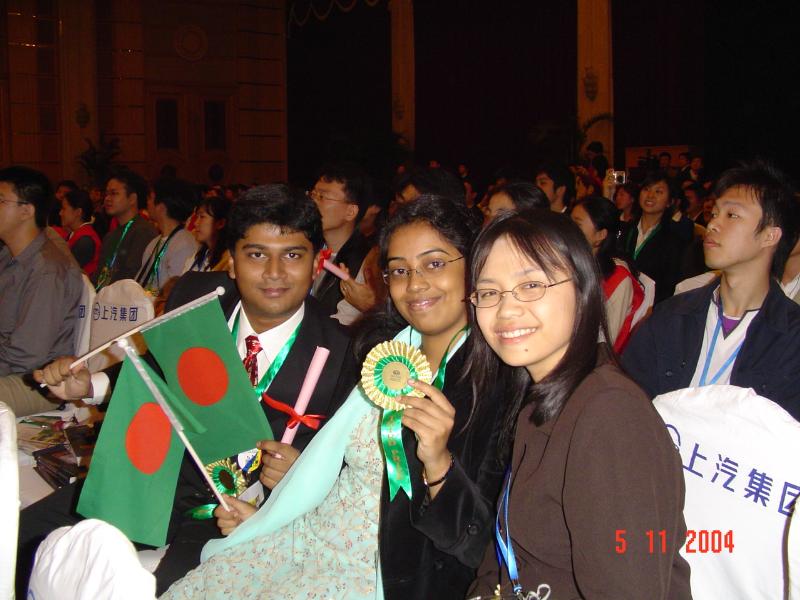 Imranul Hoque and Sonia Jahid, two Level 4, Term 2 students of Department of Computer Science and Engineering (CSE), BUET won the 3rd Prize in the Project Show for Future Engineers of "World Engineers' Convention 2004" held at Shanghai, China from November 2 to 6, 2004. World Engineers Convention (WEC) is considered as the Olympiad of Engineers and is held every four years. This is the first time any student from Bangladesh participated and also got prize in such a prestigious convention. More than 3000 engineers from all over the world were present in the convention. The Project Show for Future Engineers was a concurrent event with WEC and almost 300 participants from 20 countries including USA, Ireland, China, Korea, Japan, Malaysia, India participated in the show. The next WEC will be held in Brazil in 2008.

Imranul and Sonia's project "Telephone Controlled Voting System" is a low cost device accompanied with software to support voting system of any country or organization. The election commission or the authority that will conduct the election has to use the device. If this system is used, voters can cast their vote from any part of the world and from anywhere they are, using land or cell phones. It saves time, energy and money and is very much useful for busy people in the present world. Citizens living outside their own country can also cast their votes using this system.

The project was very much praised in the convention and got much publicity in Chinese Newspapers and Television Channels. The same project got the 1st prize in "Hardware Category, 1st Stamford IT Fair, 2004" and the 2nd prize in "Tech Fair, 2004, BUET".