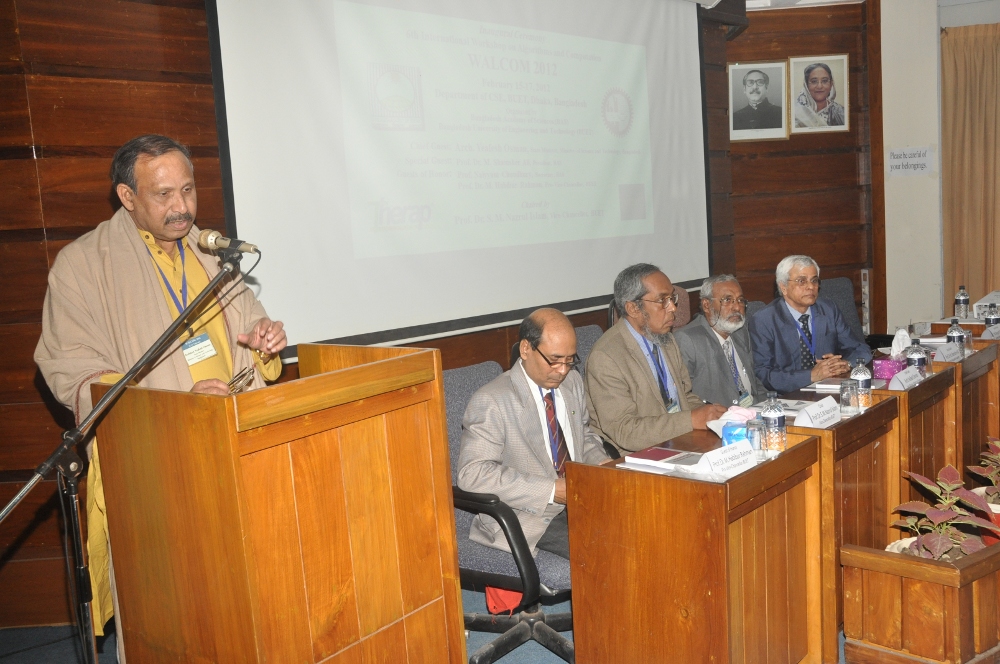 WALCOM 2012, the 6th event of the reputed international conference series was held at BUET during 15-17 February 2012. WALCOM 2012 was hosted jointly by Bangladesh Academy of Sciences (BAS) and the Department of CSE, BUET. The event started with a short inaugural session on the 15th of February chaired by Prof. Dr. S. M. Nazrul Islam, Vice Chancellor, BUET. Architect Yeafesh Osman, the honourable State Minister, Ministry of Science and Technology, Government of People’s Republic of Bangladesh kindly graced the occasion with his presence as the Chief Guest of the session. Prof. Dr. M. Shamsher Ali, President, Bangladesh Academy of Sciences, was present at the occasion as a Special Guest. Prof. Dr. M. Habibur Rahman, Pro-Vice Chancellor, BUET and Prof. Dr. Naiyyum Choudhury, Secretary, Bangladesh Academy of Sciences were also present as Guests of Honour. A tribute to the Martyrs of the Language Movement was paid with due honour in observance of the month of February during the inaugural session.

WALCOM 2012 was proudly sponsored by Therap Services LLC and Vizrt. Apart from having technical sessions, the scientists and participants of WALCOM 2012 took part in social gatherings including Workshop dinners and sightseeing activities. Notably, a total of 27 foreign scientists including academicians and PhD students from Belgium, Canada, Denmark, France, Germany, India, Italy, Japan, Korea, Switzerland participated at the workshop. WALCOM has been being organized by Bangladesh and India in alternate years since 2008. In this setting, it was decided that the next WALCOM, i.e., WALCOM 2013 would be organized by India at IIT Kharagpur.