BUET Team Has Won the International Robotic Challenge Regional Round: 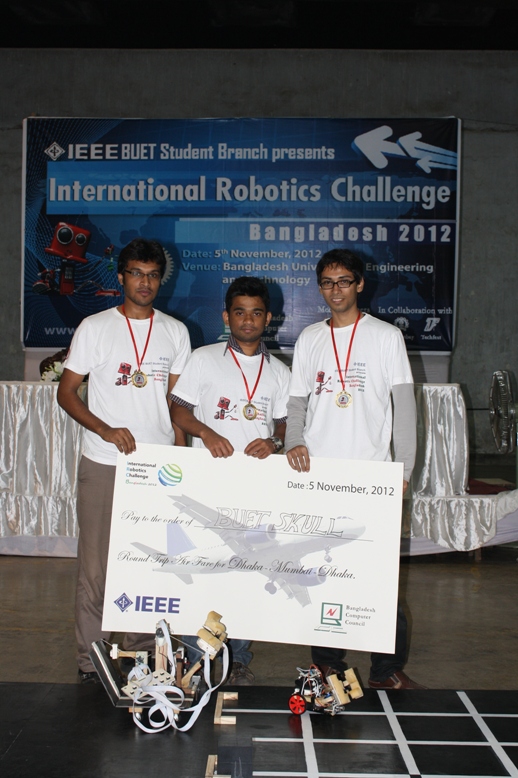 International Robotic challenge (IRC) has been the largest Robotic competition in Asia for 15 years. It is also one of the most prestigious international competitions for many years. The qualifying rounds for IRC is held in all participating countries - Bangladesh, Egypt, India, Indonesia, Pakistan, Sri Lanka, Thailand, UAE. Winners of each of these countries will get entry into International Robotics Challenge Grand Finale to be held during Techfest at IIT Bombay on January 2-5, 2013.
This year the regional round of Bangladesh was held in BUET on November 5, 2012. Teams from different universities of the country participated on the event. Team BUET Skull from the CSE Department, BUET outplayed all other teams by a big margin and became champion with 180 points in 2 minutes 43 seconds while Runner up team IUT Isometric got 65 points in 5 minutes. These two teams will go to the IRC grand Finale to represent Bangladesh.
Team members include Jahidul Islam (CSE), Mahfuzul Islam (CSE), and Alif Ahmed (EEE). The team was mentored by Prof. Dr. Md. Monirul Islam, Hasan Shahid Ferdous, Nashid Shahriar, and Md. Mustafizur Rahman.